Getting to Know Genesis Rodriguez- AKA Honey Lemon in the New Disney Animated Movie: Big Hero 6

Last week we went to the pre-screening of Big Hero 6, the awesome new animated Disney film. There is no other way to say it: We Loved it! It was a huge hit with all of our family members.  After the movie viewing, we got to know one of its characters via the voice that brings Honey Lemon to life.

We don't want to give much away yet because we are preparing a review of the film for you.  However, we don't want to leave you hanging either, so here is the synopsis of the movie:


From Walt Disney Animation Studios, the team behind “Frozen” and “Wreck-It Ralph,” comes “Big Hero 6,” an action-packed comedy-adventure about the special bond that develops between Baymax (voice of Scott Adsit), a plus-sized inflatable robot, and prodigy Hiro Hamada. When a devastating event befalls the city of San Fransokyo and catapults Hiro into the midst of danger, he turns to Baymax and his close friends adrenaline junkie Go Go Tomago , neatnik Wasabi (voice of Damon Wayans Jr.), chemistry whiz Honey Lemon and fanboy Fred . Determined to uncover the mystery, Hiro transforms his friends into a band of high-tech heroes called “Big Hero 6.”

Inspired by the Marvel comics of the same name, and featuring breathtaking action with all the heart and humor audiences expect from Walt Disney Animation Studios, “Big Hero 6” is directed by Don Hall (“Winnie the Pooh”) and Chris Williams (“Bolt”), and produced by Roy Conli (“Tangled”). The film hits theaters in 3D on Nov. 7, 2014.

From Walt Disney Animation Studios (“Frozen,” “Wreck-It Ralph”) comes “Big Hero 6,” an action-packed comedy-adventure about the special bond that develops between plus-sized inflatable robot Baymax (voice of Scott Adsit), and prodigy Hiro Hamada (voice of Ryan Potter), who team up with a group of friends to form a band of high-tech heroes.

It is a great film for the entire family.  Like I said before, we will very soon share all about it with you. #BigHero6 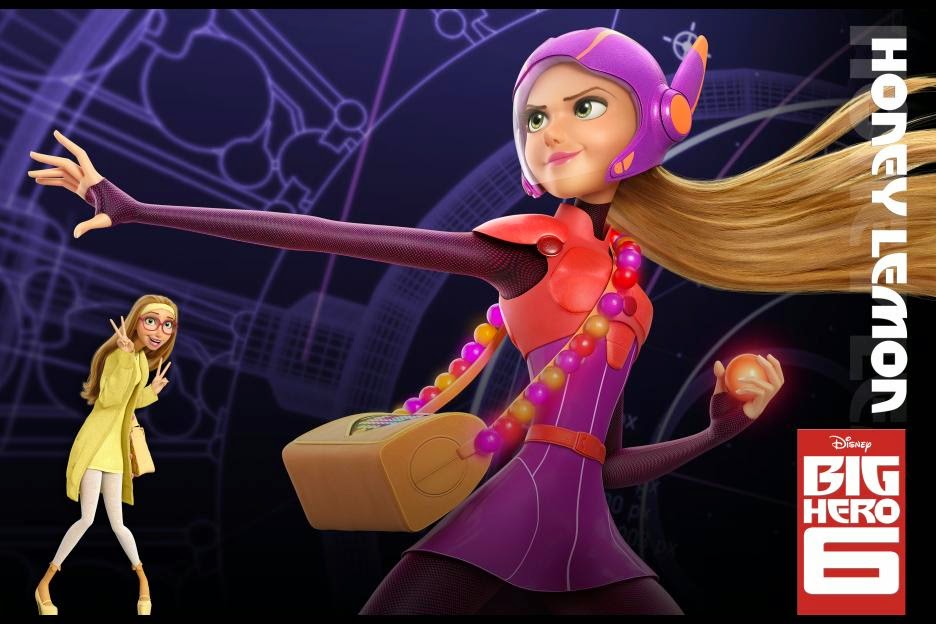 Today, we share our interview session with Genesis Rodriguez.  It took place at The Miami Children's Museum (@MiChiMu).  While I worked the kids enjoyed a private tour and all the museum has to offer.  yes, apparently they took the Publix Supermarket area by storm!

Back to Big Hero 6, did you know Ms. Rodriguez is a Miami native?  I didn't either, but in true Miami fashion we did the "305" (we are always referring to our city via our phone area code) thing and had a Spanglish conversation.  Of course la abuelita (grandma) came up in the conversation :-)
Genesis Rodriguez  is the superb Latina talent behind the voice of Honey Lemon.  Honey Lemon is one of the 6 scientist friends of the film Big Hero 6.  Honey Lemos is a sweet as can be.  She also has an amazing drive and a strong can-do attitude that makes her unstoppable!  As you can imagine, bringing Honey Lemon to life allowed Ms. Rodriguez to inject into Honey some of her traits and heritage.

Here are some excerpts of the interview so you can get to know Genesis Rodriguez and Honey Lemon a little more:

Q: Is Big Hero 6 a film for boys?
A: It is a film for everyone!  Actually there are two very strong female characters in the movie that at times are more fearless than the boys in it.  Just like in the movie Frozen, we are talking about girls that do not need saving.  As a matter of fact these girls are ready to take on the world, and are the first ones ready for action.  I hope more and more girls are the first ones raising their hands in class.  Knowledge is power.

Q: How did you feel about portraying a girl in Science
A: Kids now a days want to be famous.  I would love that kids added something to it: I want to be a famous scientist or chemist. Whatever they choose to add, anything to change the world, and make a difference.  Give them (kids) hunger for technology and knowledge.  I love everything sci-fi. I am a Star Wars nerd, and a huge technology fan.  In high school,  I was in an all girls robotics team.  I have such a love for technology!  I hope I can go to high schools and work with kids on pushing technology.

Q: Do your know what it would be like to have a real BayMax? #MeetBayMax
A: Bay Max is so cute!   Do you know what it would be if we would have a BayMax in our lives? right now with all the health scares and what not, how wonderful would it be that a robot can take care of you and treat you.

Q:If BayMax were to scan you, what do you think he would treat you for?
A: I think my stress levels.  Stress always induces something else, so definitively I would love a cure for stress.

Q: What part of Honey Lemon do you wish you had?
A: The ability to run in heels!

Q: Do you think the world is ready for a Latina super hero?  what powers does she have?
A: Honey Lemon is Latina and she happens to be a superhero.  She wasn't written as a Latina but if I put a lot of myself in her.  If you notice, she pronounces Hiro differently, and that is me giving the Latino terms of endearment.  She expresses herself towards him is Spanish to get more proximity and warmth the way Latinos do all the time.  All my action expression are more Spanish sounding like ay, wass and photo-photo!

Q: San Fransokyo is a hybrid city.  Many Latinos in the USA can relate to a hybrid or mixed culture.  How do you bridge the two worlds?
A: (Answering in Spanish) I am bilingual and bi-cultural. I identify myself perfectly with both cultures and i believe that San Fransokyo is exactly a reflection of that.  These group of 6 friends are banded together by their love of science not for what they look like of where they come from.  Having both worlds is an advantage!  It is a super power!

Q: Most difficult and most fun scenes to work on?
A: The most difficult were the action scenes because you are actually standing still, and you are making noises as if you are falling off a building .
My favorite scene was when the friends are trying out all the gear on the butler, and he was so stoic.
For Honey my favorite scene is her introduction when she comes in rolling with the ball.

Q: If you had a super power what would it be?
A: My favorite super power would be to have the ability to communicate  with everyone.

What struck me the most about Ms. Rodriguez was her eagerness to inspire and support children to dream big and be more.
So in her words, remember kids: knowledge is power, it is strength.